Aiden Judges Next Generation of Chefs 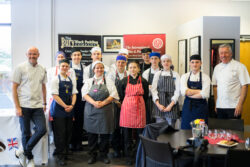 Local catering students from across the North of England took part in the final of the first ever black pudding competition for catering colleges. It took place at Warrington Vale Royal college on 25th May.

Aiden was amongst the judges at the Warrington competition. 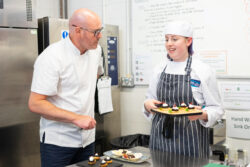 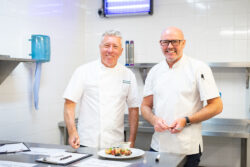 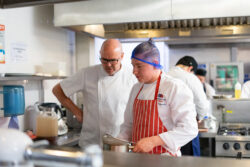 Organised by IWFS Northern branches, and sponsored by The Bury Black Pudding Company, the competition judges included Aiden Byrne and Paul Heathcote together with other top chefs Stephanie Moon, and Eugene McCoy.

The winners will be announced at a formal ceremony at Bolton College on June 28th and awards will be presented to the top 3 winners from the entrants from the six colleges.

Tim Gittins from the IWFS explains the Society’s reasons for introducing the competition. “At the core of the IWFS philosophy is the promotion and celebration of great food and great ideas. We wanted to spotlight an under-recognised part of our national cuisine, so we put together a unique collaboration of leading Northern catering colleges, chefs, and industry suppliers. Fundamentally, the competition offers a chance to students to work with amazing ingredients and have inspiration and guidance from professionals who share the enjoyment of creating unique food experiences.” 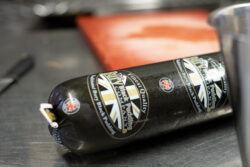 Chef Aiden Byrne is passionate about supporting and developing the next generation of food stars and indeed Black Pudding:

“What a joy it is to see the world waking up after the pandemic and normal service resuming.

These young students were only in school when the pandemic hit and here, they are now competing in competitions in a professional environment.

The IWFS have been amazing with their foresight to bring this very humble ingredient to the very forefront of this competition.

Black pudding has a place on any menu whether it be a pub, hotel or a Michelin started restaurant and the students here today at Warrington Vale did it proud.’’

Want to know the latest news and events at The Church Green?